"The best meals are the ones that make you want to take a shower afterwards." The term "Indian food" covers a lot of territory. Anyone interested in Indian cuisine or traveling to India should consider watching the series Raja Rasoi Aur Anya Kahaniyan on Netflix. After a few episodes it should sink in that Indian food consumed in the US might be delicious and give some context to the consistency and spice profile, it is limited in depth as compared the country’s regional, multifaceted cuisine. The dishes most often served and the ingredients used differ for geographical reasons as much as they are out of religious or cultural obligation. Across the country, the diversity spans more than nine religions, all of which influence the relationship with food. For example, Hindus eschew beef, Muslims avoid pork and Jains practice strict vegetarianism, yet many hotels of Kerala, a state known for its sizable Christian and even historically Jewish community, serve all things edible, including pork and beef. Adding to the complexity, it took some explanation to realize that all restaurants are called “hotels” in Kerala. Fried chicken is also quite popular, delicious and highly advertised via roadside signage as Broast! Fried chicken aside, there much less international food and American fast food as compared to many other Asian countries I have visited.

My most memorable meals in India were definitely the two potlucks prepared by students and their families at KVM during my field experience, dinner at my host teacher’s house, the sadhya, traditional Keralan banana leaf feast eaten during my homestay on a small spice plantation in Wyanad and lungar, the community meal at the Sikh temple or Gurdwara where a free, “pure veg” meal is prepared by all and served to all, without distinction of religion, caste, gender, economic status, which we experienced when we first arrived in Delhi.

A typical Sadhya can have about 24–28 dishes served as a single course. In cases where it is a much larger one it can have over 64. It our case it was probably closer to 11. It is eaten in certain ritual style, always with hands, without utensils with people seated cross-legged on mats.

Eating mouthfuls or curries and rice with your hands was not easy and even with a weeks worth of practice I couldn’t quite he cup my fingers correctly to form a ladle not use my thumb correctly to direct food into my mouth. I’d like to think what I lacked in technical skill I made up for with shear appetite and gusto. Nevertheless, after eating only with my hands during my field placement in Kerala, I was unenthused to pick up a pair of utensils at our posh hotel back in Delhi.

One of the most difficult things for me personally about being Jewish is the incredibly restrictive, detailed and by construct insulating laws of Kashrut. It was interesting and reassuring to watch a school community with diverse dietary restrictions navigate through the experience and yet, eat together. Prior to leaving, my students from Bangladesh with much delight prepared a list of food that they demanded I eat in India. I added a few on my own from that Netflix show I referenced earlier. See below. Many of these items were served during student potlucks, but also as breakfast at our fancy hotel stays and on the road at a local “hotel.

1.Nihari - a stew from the Indian subcontinent consisting of slow-cooked meat mainly shank meat of beef or lamb and mutton, goat meat and chicken, along with bone marrow.

2.Bedmi puri with aalu sabzi - Sabzi is green vegetable in Farsi. I love that Hindi overlaps especially when it comes to all things food! Spicy, delicious, chatpati potato gravy is served with lentil stuffed flat bread. There is no more flavorful a breakfast

3.Daualt chat - churning milk with 2 sticks or a wooden whisk in a circular bowl for hours under the moonlight is the original, if romantic, method of creating this magical dessert

4.Parathas - One of the first things we did in India was milk a cow and make parathas on the roof of someone’s house while the kids in the village attempted to shoot the debris from the roof over a nearby fence with a sling shot. I make a crappy paratha but somehow managed to score a home run. Maybe it’s the David in me :) The Parathas in Kerala are special because they are layered. People take great pleasure in pointing that out.

5.Morg choley - a dish that combines chicken and chickpeas in a flavourful tomato sauce resulting in a finger-licking curry that goes well with naan, parathas or rice

7.Raj kachori - Queen-bee of the Chaat family and has quite an apt, royal name to signify that as well. Raj Kachori is crispy, crunchy, sweet, spicy, tangy, extremely flavorful and is the ultimate form of chaat. I had the pleasure of eating this for breakfast at our posh hotel but would have loved to experience this on the street as it is most often enjoyed

8.Chole bhatura - a dish from the Punjab region in the northern part of the Indian .This Punjabi dish is a combination of chana masala (spicy white chickpeas) and bhatura, a fried bread made from maida 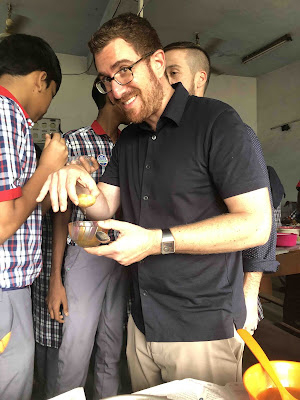 9.Baobhaji - Pav bhaji is an Indian street food that consists of mashed vegetables (bhaji) with a spicy masala and butter all tucked in between a soft buttered bun (pav). This I tried. Bao bhaji substitutes the pav for bao buns. What a world!

10. Pani puri - this unassuming dish unfortunately was a bit of a letdown since it was the most hyped item from my students prepping this list. I don’t know. It wasn’t spicy, it wasn’t very sweet, but eating fried stuff and liquid together like a cup was kinda fun to eat.

13.Rashmal - I think this is no different than a samosa, but I’m no expert, I just eat stuff

14.Borhani - a type of lassi with sour doi, coriander and mint. Coriander is tasty in all sorts of beverages, even plain ol’ water.

16.Chaati - I’m guessing my students just wanted me to have chai tea? That is almost unavoidable, rightfully so. I even drank chai from pottery that you smash on the ground and which is later swept up and rekilned to make new cups. How cool is that? Speaking of tea, I got to visit a tea plantation and factory in Wynaad.


17.Bisi bele bhath - a spicy, rice-based dish with origins in the state of Karnataka, India. Bisi bele bhath, which translates to 'hot lentil rice dish' in Kannada language, is a wholesome meal. It is said to have originated in the Mysore Palace and from there spread across the entire state.

18.Avial - a multifaceted vegetarian curry and the name of the restaurant closest to our hotel in Kerala although they never had an avail available :(

19.Puttu - Thomas’ wife prepared Puttu, steamed cylinders of ground rice layered with coconut, often with a sweet or savory filling on the inside that are made using an interesting contraption that looks like a French press

.
20.Appam - a type of chewy pancake, originating from the Indian subcontinent, made with fermented  rice batter and coconut milk
Posted by David Edelman at 8:52 AM No comments: