Over the North Pole to HK

I was surprised that less then 5% of the passengers appeared western.  My travel neighbor to the seat next to mine didn't speak English. During the flight to Hong Kong I watched approximately 15 episodes of mad men. The plane was brand new and included power strips at the base of each seat. A big bonus. In the plane, 16 hours later after some significantly bothersome and uncomfortable turbulence we landed.  As I gathered my belongings, I noticed that my feet no longer fit inside my sandals and instead doubled in width from the swelling. 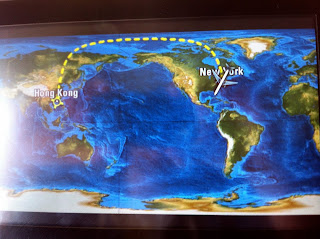 I waddled out of the aircraft and entered the Hong Kong airport. After the long mundane flight, I tried to reward myself by immediately trying to identify anything oddly Chinese and interesting in the airport. The first of which were 2 people in surgical masks manning a temperature monitoring station. Your body heat and temperature is measured ez pass style along the terminal to prevent any arrivers with bird flu before you arrive at customs. I was asked to remove my hat to ensure my temperature was read accurately. We passed a fairly empty 711 which wasn't selling slurpees and and Citibank ATMs to a mainland travel bus counter and paid 150 Hong Kong dollars for transportation to the GuanHoug border. The area surrounding the airport reminded me of a mountainous Florida, with condominium towers overlooking palm tree lined highways.  We passed Disneyland Hong Kong.

30 minutes later we were at the Hong Kong border and then the mainland China border where are visas were checked and more forms were filled out. We still had a good hour and a half before my friend Dan would arrive to meet us. Utterly exhausted from the 16 hour relatively sleepless flight, I propped up my bags and used them as a backrest as I sat on the floor and closed my eyes. It was really hot and humid and I wished we stayed in the airport longer before traveling to the border. I was dead tired. I must have dosed off and when I opened my eyes, my travel companion Mike was no where in sight. I was very unnerved by this, sleeping without a lookout to ensure the safety of me and my luggage. Suddenly, I was being shaken by Dan, "hey buddy, welcome to China." Dan was on time! He helped me up, bought a beer and some sodas.

Mike told me about how people walking by were staring at the redheaded foreigner sleeping on the dirty, sweaty floor with much amusement and curiosity.  I even felt that the sanitation man who separated  recyclables from the garbage cans was staring. Dan drank the can of beer in taxi on the ride back to his apartment and told us about life, teaching and his vision for our trip together.  Hong Kong near the airport looked like a mountainous Florida like state, with tall condos which overlooked palm treed lined highways.  I was so tired at this point I could hardly contemplate I was in a foreign country. I was more focused on using my energy to just move my body forward.  Unfortunately we had many important tasks to complete before we slept. We needed to get official photos taken for residential our visitor documents at the police station, all non Chinese visitors unattached to a tourist vacations and hotels are expected to register at the police station, obtain our first Chinese meal of food and get an aero bed from Dan's friends apartment. Then after all that, we got to shower and sleep. I slept on the couch in the most pleasant air conditioning.


Posted by David Edelman at 6:46 AM No comments: