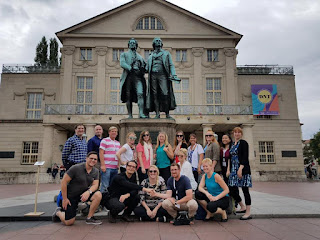 Prior to our departure to Germany, we gathered at the Goethe Centre in Washington, DC to drink beer, eat pretzels and play some goofy German games amongst the faces of Germany’s newest residents, immigrants from civic conflicts in which the US government played a leading role. Then came the lecture. A formal, bulleted list projected via PowerPoint laying out German cultural norms, such as waiting to be invited into social activities such as conversation, snacking and to be acutely aware of both your physical and auditory presence, especially on public transportation. As compared to the earlier, sillier activities, these lessons on German culture and etiquette were delivered with striking seriousness. Almost as contradictory to let’s say a city where it's common place to see subway riders yelling, playing music and occasionally swinging from the poles doing "showtime!"

You could probably imagine my surprise when I found myself sitting a train to Leipzig with a loud, rowdy and intoxicated group travelers that would rival any NYC Subway car. I learned from my red faced inebriated neighbors that they were completing a train travel laden high school reunion of sorts. They drank, sang and socialized audible to their hearts content. As our trip leader walked the aisle the look of puzzlement on her face as we made eye contact seemed to imply I must have somehow orchestrated all of this. As the conductor appeared from the back of the car to check tickets, my new friends became even louder and more boisterous. They egged me on to sing, humming New York, NY with their cups in the air, they were definitely looking for a little bit of permission and a sense of social confirmation.

It was moments like this that helped me to see that even Germans, on occasion believe rules are made to be broken. Perhaps even reveling in doing the wrong thing. The systemic and culture differences between Germany and NYC are real, overt and well documented, yet but what struck me the most after visiting Germany this summer were the acts of deviance, rebellion and personal freedom that are originally went unnoticed during previous visits and conversations. Germans, in the past and present, can subvert the status quo and push the limits of individual freedom in unique and surprising ways.

Our fellowships first stop was Kaufburen, a small city outside of Munich in which we visited a school and stayed with a family for two nights. Kaufberun is home to a large refugee population which we met at school. Outside a community center known as the tea house in which German citizens are encouraged to socialize with refugees and new residents, stood a monument to the Holocaust designed by students at the school who formed a group called, in English, the ones who pour salt on the wounds. Inside the tea house, I met individuals from Afghanistan and Syria who were in Germany largely due to Article 1 of the German Constitution. Better known as the German Dignity Clause, Germany in an attempt to right the wrongs of its past has one of the most open refugee admittance policies in the world. Yet, as I listen to these individuals stories, this issue of dignity becomes more complicated. The vast majority are prevented from working, even if their are employers that would like to hire them. 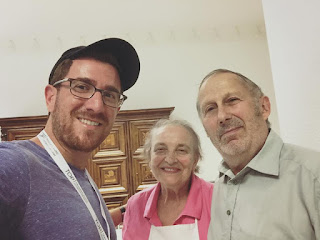 I thought a lot about my Grandfather who immigrated from Poland before the war, my cousin Shelia who survived Auschwitz and passed away a few months before our trip and also my wife’s family, all refugees in their own respect from Iran, all assets to any place they would call home, all assets to an country. Leipzig was also when I started to become more disillusioned with my group. I expected that the bond between educators would outweigh potential geographic, political and cultural barriers. As the trip progressed I noticed a thickening of the air between myself and certain fellows, and started to question my initial mindset of connection and comradery. It wasn’t until I was told that “some of us on this trip are actually German” over dinner that I fully grasped that my presence on the trip posed a challenge to certain fellows to feel pride and celebrate their German heritage.

I used this event as inspiration to surround myself with individuals that would appreciate my presence, including an impromptu visit to a synagogue for Shabbat services and lunch. For the same reason it took me forever to find the place, was the same reason this synagogue survived the war. The shul was connected to a large residential building complex. With gentile tenants living below, the kristelnacht rioters weren’t able to torch the place. Signs of resistance and renewed Jewish life were found in the most delightful and surprising of places 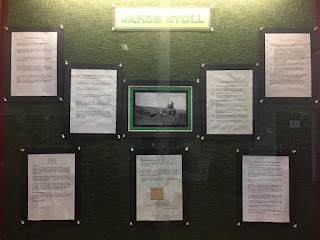 In Wurzburg, I had the opportunity to visit a the Jakob Stoll School. To my surprise Jakob Stoll was named for a German Jewish Educator who was sent to Buchenwald, only to escape to NYC and establish a prominent synagogue on the upper west side. Side note, always read the placard. I spent the afternoon with Silas, a student that delivered a presentation to our group and who I befriended when we were outside and students were semi engaged in an overly orchestrated lesson that was more for us than their students. Once I returned to NYC, Silas visited me and my school during summer session. 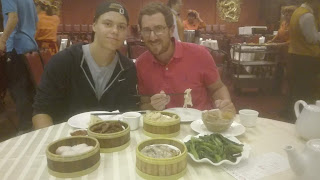 This was Silas' first time in NYC and I was curious to learn more about his impressions and attitudes about life in NYC. Walking down 2nd Avenue to the Bowery, Silas drew my attention to the adults playing basketball in the park. "In Germany, you wouldn't see this. Everyone is much more likely to be spending time with their families at their own homes, not together in a park. This I really like. If I lived here, I would hang out on my firm escape or on a stoop and interact with everyone!" Silas holding his Chinatown ice cream cup elbowed me and with a grin asked if he could toss his garbage into a pile that had collected in proximity to what was once a garbage can. "Do what you need to do," I answered to Silas who had a grin on his face from ear to ear. 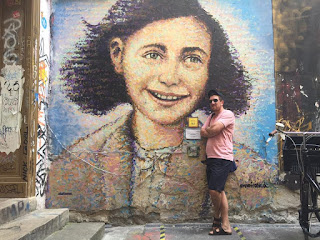 Our TOP trip ended in Berlin. I believe I witnessed what Silas was talking about to a degree unimaginable in the US. At night, dozens of teenagers gather in parks my the waterfront to drink, smoke, dance and generally cause low level chaos, all amongst homeless, families with small children and without parental or police intervention. Berlin was free spirited, anything goes, in a way I did not expect or experience during my post college excursion through Europe. The street art, the cityscape, the people on the street, Berlin is alive. 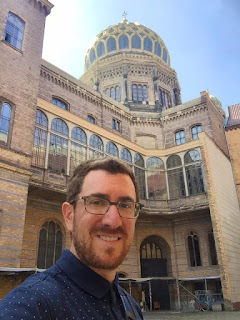 On my last day in Germany, I spent the day quietly contemplating my experiences in the courtyard of the The Neue Synagoge. During Kristallnacht the Neue Synagoge was broken into, the Torah scrolls desecrated, furniture smashed and other combustible furnishings piled up and set on fire, yet the building survived. Lieutenant Otto Bellgardt, the police officer of the local police precinct on duty that night, arrived on the scene in the early morning of 10 November and ordered the Nazi mob to disperse. He said the building was a protected historical landmark and drew his pistol, declaring that he would uphold the law requiring its protection. This allowed the fire brigade access to extinguish the fire before it could spread to the actual building, and the synagogue was saved from destruction.

Posted by David Edelman at 1:27 PM