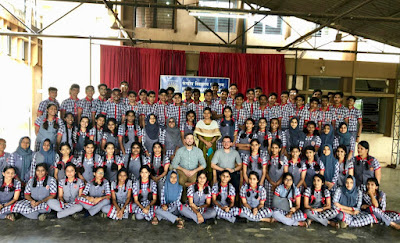 Les and I did a fair deal of teaching at KV often riffing off the immediate needs of students and staff during the week at KV. I taught and cotaught in an array of classrooms, facilitated Q&A sessions with teachers and staff, even performed Don’t Worry, Sandoosham (Happy in Malalum) in front of the whole school. You can watch it below.


Equipped with odd appreciation for difficult and uncomfortable social situations and armed with a slew of materials related to school and my classroom in NYC such as two school yearbooks, Regents Exams for all subject areas and a bunch of activities pertaining to my economics and government classroom, I thought I would prepared for any situation or topic thrown at me. None of this however prepared me mentally or logistically for the high stakes, all eyes on you, Vishram! Salhan! Vishram! militaristic, standing at attention, student body lead morning assemblies at KV.

Assembly is a countrywide phenomenon and something all US educators should behold in absolute bewilderment whether it’s in person or in video. Watch an Indian  morning assembly in action. The first assembly was most extravagant as it involved student drummers who led us via procession up the school steps and out to the courtyard where we were presented with the entire school community. Every morning students gather outside to stand at attention, meditate, pray and chant in unison, listen to the daily news, sing the national anthem with accompanying instruments with every student’s hand raised in salute, and as an added bonus, on this and every other day this past week listen to words of wisdom bestowed upon them by Les and myself. I love talking and I’d like to think large audiences don’t scare me, but after a display of respect and discipline that is morning assembly in India, my heart felt like it was going to beat out of my chest and probably would have Temple of Doom style if it wasn’t also for the equally as sedating effects of the chanting and prayers to help ease my nerves.  For my first address, I thanked students and staff for welcoming us into their school, introduced myself and shared a short story I read and prepared the night before about Steve Jobs who was inspired at an early age to promote workforce collaboration through design when his elementary school teacher demonstrated how rough unpolished rocks turn into beautiful polished gemstones when given 24 hours to bump into each other inside a tin can when you add a little water to the mix. With the first assembly in the bag and feeling invigorated, coteaching was as much if not more enjoyable. 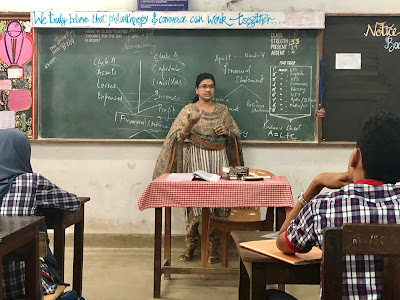 If my mind serves me correct, my first class was accounting. Having studied accounting for only several weeks in college before dropping the class I expected in add little to the conversation, but the teachers conciseness helped me to quickly grasp the content and ask the class some high level application based  questions related to how intellectual property or future purchase orders are accounted for in accounting. I was glad that these questions were relevant to students studies and pushed their thinking as these topics would be elaborated on in greater detail in weeks to come.

Ms. Sajina T’s 12th grade class was writing op-Ed’s related to the days morning assembly when we first dropped in. Later on they hosted Les and I as students presented and discussed two poems, A roadside Stand” by Robert Frost and Zitkalaza’s “First day in the land of apples” which discusses American India forced acculturation at the Carlyle Indian School. Having read the poems the night before and having a personal attachment to Frost as I first shared with students how my 10th grade English teacher once berated me in front of the whole class after reading The Path Not Taken exclaiming “I use to like this poem before you read it!” I asked students to share their thoughts on the concept if “good walls make good neighbors,” before connecting the concept to recent happenings in US immigration policy and answering students questions about Trump by sharing that I thought his approach to diplomacy was narrow minded and emphasized peanuts in the form of trivial givebacks as opposed to relationship building and lasting peace and world stability. 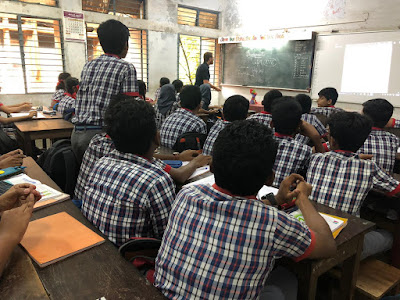 I also facilitated the second half of a social science lesson in which students were discussing the characteristics and consequences of the government building dams on tribal lands. I was encouraged to take over and used the opportunity to model inpromptu debate and student to student conversation asking students to discuss the pros and cons in small groups before sharing out their claim and argument on the issue. I also asked students to call on each other and required students to repeat back the points their classmate’s made before adding on their own thoughts on the topic to encourage student to student dialogue. At the end of class I asked students to conceptualize the values of the affirmative and negative and tied the issue of individualism vs collectivism back to Trump’s wall and how individualism in the form of respecting property rights will almost definitely win out over eminent domain and building a physical wall for “national security.”

Teaching The Great Recession With Thomas 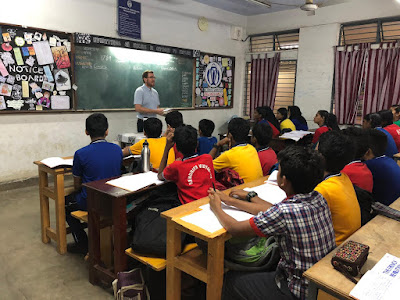 I believe Thomas and I were well paired for this experience, both because we love and teach economics but also because perhaps we have similar teaching styles. After a short mini lesson on creating credit through the money multiplier effect, Thomas did what he said his students love the most and shared real life examples or “stories.” He discussed how Lehman Brothers went bankrupt in 2008 and I asked students to think why the government let Lehman fail while they bailed out the other big banks with US tax dollars, if the government should bail out banks in danger of failing, too what extent individuals receive similar treatment and why they think crooked bankers don’t serve jail time like drug dealers.

We also cotaught some primary source classes including a 4th grade English class in which students were first working on writing nouns of items seen around in the classroom and then using “describing words” or adjectives to describe the items and then themselves and their teachers, including us :) I tried to push everyone’s thinking my asking students to use the model “I am .... because....” in which students needed an adjective to describe themselves and a specific example or piece of evidence to defend their choice of noun. 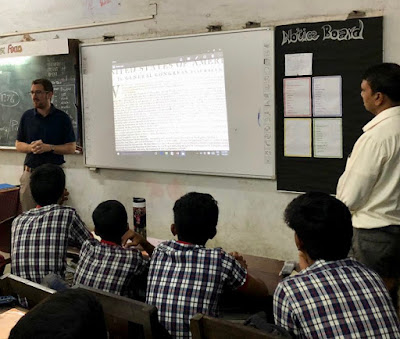 I was asked to prepare a lesson on the US and French Revolution and decided to combine both into one lesson and also tie India into the mix as well. Students were surprised to learn that the US Revolution predated the French Revolution, Thomas Paine stirred the pot for both and that the desired effects of the French Revolution includes identical language that is found on in the Preamble to the Indian Constitution in the first page of their textbook. Students were also delighted by the striking similarities in language between the American Constitution and India’s.

Here are two exit slips from students produced at the end of this class when I asked them to reflect on the content, process and premise of my lesson and how it compares to their previous instruction. 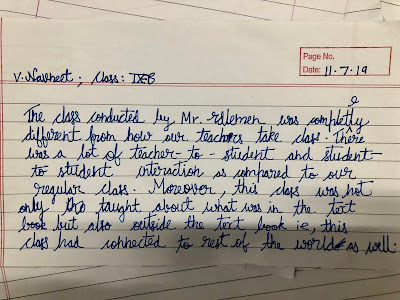 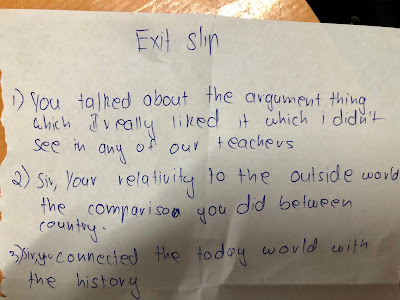 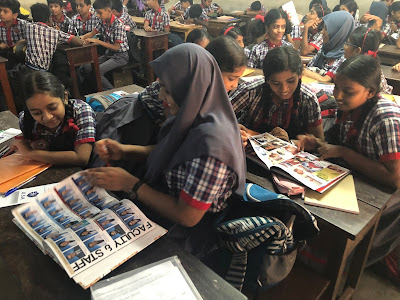 Towards the end of our stay it was nice to see that more and more teachers were inviting us to their classrooms and asking us to address their students. Les and I visited many other classroom to share about our school and discuss our students. I used my school’s yearbook as a picture book to discuss our focus on dentistry and pharmacy technology while Les shared videos of his school’s music and drama performances and creatively used Padlet to share student created introductions from his students and created similar video responses with some of the kids in our classrooms in KV. t is our hope to use tools like this to help foster relationships and collaboration between students at our schools.I also left a copy a USA school yearbook in the library in the hopes that students will continue to develop observations, inferences and questions about my school.