I bet teachers in India are as skeptical of professional development as teachers in the US. That was at the for-front of my mind as Les and I greeted the staff of KV national public school as they slowly and sporadically trickled into the one of the less technology compromised classrooms on the top floor of the building. Thomas our host teacher had asked us to deliver a presentation to staff related to how we use technology in our classrooms for instruction and assessment purposes. I was most excited by the prospect of using this opportunity to not only show off some of these new tools but encourage teachers to have some fun and learn by doing as well. You see, although teaching and learning in India is revered and fairly rigorous, active learning appears to taper off after primary school. This is fairly common worldwide. It also seems strongly correlated with student engagement as captured by student perception data.

When teachers entered I kindly asked them to take out their phones and log into quizlet.live and enter the code on the screen. Les played some music in the background as staff got situated and KV quickly felt a little more familiar to my own classroom. The game began. As I explained to the staff that they would need to reorganize themselves into groups, I knew that we had won them over out of shear curiosity alone. Now in their assigned animal groupings the game began, requiring teachers to work together as a team to correctly answer the 30 questions some teacher who knows where in the world previously created related to assessing people’s understanding of the USA. 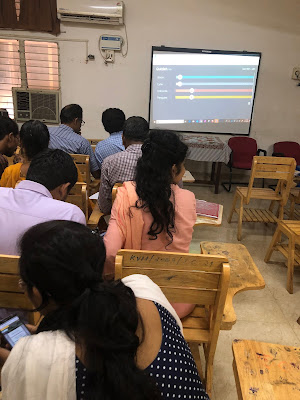 By the initial struggle to answer any of the questions nor teachers understanding that only one member in their group had the correct answer and they actually had to collaborate and work together to select the right answer, I thought we were in for a long and uncomfortable debrief. In hindsight I wasn’t surprised as most of the classrooms require students to work independently and share their individual thoughts as opposed to discussing their answers with classmates or working together to solve a problem. Thankfully, after several minutes of scoreless inactivity, teams started to answer questions together and the experience became quite thrilling with teachers screaming with delight just like my students do while racking up points which the Black Rhinos moved closer to victory.

Les facilitated the next piece by handing our pieces of printed paper, each containing Plickers, wingding looking doodles looking something in between Pac-Man ghosts and Rawshack Test ink blots. These odd pieces of paper that he generated out using Thomas’ printer that he was convinced was smoking or at the very least spraying dust particles are used to collect student or it this case teacher data. Les proceeded to ask teachers a bunch of questions about their comfort with technology and content questions related to the lessons we cotaught with their colleagues thus far. After each question Les asked for a response using the cards we provided and then proceeded to pan the classroom with his cell phone to record the answers. 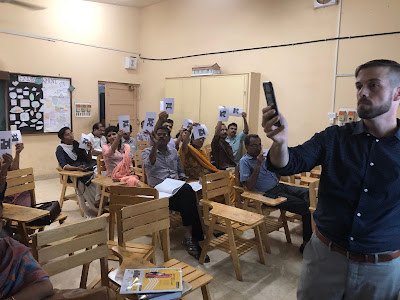 Teachers lit up with clarifying questions first asking how much these services cost to use, making me feel like some sort of infomercial pitchman when I responded, wait for it, “zero US dollars, zero rupees!” Students in India are not allowed to have phones in India and unlike NYC, lovely enough, comply with this rule almost unanimously by not bringing them to school. Given this and the lack of other devices in the classroom were somewhat less enthusiastic about being able to infuse quizlet into their classroom although some were excited by the prospect of using it in conjunction to the computer lab or assigning it to support students outside of school. Thomas’ determination to make quizlet live happen one way or another added an additional boost of positivity to the session. Plickers on the other hand had almost universal excitement in regards to adoption, especially when Les gave away the printed card we used to the most eager adopter.  The most important aspect of the session was the general enthusiasm and open-mindedness of the staff combined with the joyful and playful nature of the session. At the very least I hope we helped staff at KV realize they have so much to share and learn from one another and that professional development can be teacher facilitated and fun!
Posted by David Edelman at 8:51 AM